“This was by far my absolute favorite event of 2018 to attend and to shoot!”

When American Horse Publications announced they would offer their members a private “Behind the scenes” tour of this historic #1 ranked Thoroughbred racetrack in Lexington, KY, I was seriously jumping up and down with joy in my living room! I just moved to Charleston, WV and would only be a two hour ride away. So this was just PERFECT timing in my books. And thanks to the media pass, as a first time visitor to a racetrack, I would also be watching the races as close to the action as possible.

In the early morning hours of a rainy October day, our group of around 10 people from the equine industry was welcomed by Keeneland’s Communications Associate Amy Owens, the ever so knowledgeable tour guide Liane Crossley and our AHP Exec Director Christine Brune. After a small intro, we made our way to our first stop, the Sales Pavilion/ the Winning Circle.

Some of the world’s famous Thoroughbreds have been sold in this iconic sales arena. Horse of the Year and Triple Crown Winner Justify is a graduate of the prestigious Keeneland September yearling Sale and was sold in 2016 for a whooping $500,000 to the China Horse Club and Maverick Racing before he returned to the US!

Major buyers come from Russia, Korea, Australia and some of the regular VIP’s include Sheikh Mohammed from Dubai and Celebrity Star Chef Bobby Flay.

The horses arrive around 3-5 days prior the sales, and once sold, they have 24 hours to leave the premises. Horses start the auction at $1000 minimum and sell for an average of $150,000. According to Amy, last year was their best season yet, with an astonishing revenue of $600 Million. Keeneland is not only a racetrack but also the largest Thoroughbred auction house in the world!

By the way, there are also some quite impressive paintings around the pavilion, which are displayed during the September and November sales in advance of their annual Sporting Art Auction. Fun Fact: An oil on canvas painting of Jane Fowler Bassett foxhunting in the Maryland countryside, signed and dated by American artist Franklin Brooke Voss, fetched $97,750 to be the afternoon’s second highest-priced piece.

It has been a chilly and rainy morning so far. At this point I am still using my iPhone for photos and videos.

Nick Bush, exercise jockey rider for Todd Pletcher and myself

On the track we had the pleasure of watching exercise rider Nick Bush, who rides for Todd Pletcher. He is THE most sought after and successful trainer in the American thoroughbred horse racing industry and won the Eclipse Award seven times as Trainer of the Year, four of these in consecutive years. His Champion horses have earned Millions of dollars in purse money. If I was looking for a job, I would definitely give him a call! :)

After around 30 minutes we continued our walk to the Racing Office, which is located on the trackside next to the race track/ Grand Stands. The racing office is only accessible for owners, trainers, jockeys, and staff. Here are some photos from the inside. We were also able to interview and talk to Jockey James Graham, who raced several horses that afternoon.

Now it was time to warm up with some coffee and a bite to eat for breakfast at the “Track Kitchen”. This cafeteria is open for jockey’s, owners, staff and visitors.

Although it was still raining, we continued our private tour to the stable area! That was really cool to see! Don’t forget, I have NEVER visited a race track nor was I ever close to a race track except on TV when the Kentucky Derby was on. So for me, everything was sooo exciting! :) Sometimes I found myself left behind as the group moved on, because I was so fascinated with everything and took a ton of photos!

Stable areas are off limits for the public, unless you are part of a private tour or media. And even if you can get to the stable area, you are not allowed to go into the stable but rather stand outside in front like we did, unless you are invited in by a trainer or person that works there. Horses are usually done with training races, showers and work by 10 am.

Now it’s time to get on a shuttle to drive over to the “Library”. Okay,I know what you going to envision now…lots of shelves filled with books covered in dust, how boring. You couldn’t be more wrong! This is by far beyond your regular library and by the end of the tour, it became my second favorite part of the entire tour!

Instead of a “library” I would call it one of the world’s largest research & reference center related to any Thoroughbred information. Founded in 1939, this beautiful building, inside and out, is home to over one million photographic negatives and thousands of newspaper and magazine articles about all aspects of the equine industry. Many authors, writers and journalists use their intricate collection/ index to research bloodlines and articles as they write their books, such as Milt Toby, the author of “Taking Shergar”, Thoroughbred racing’s most famous cold case in the horse industry!

According to Head Librarian Roda Ferraro (she definitely is way more than that), the oldest book is dating back to 1599!

I wish I could describe Roda to you to give her fair justice. Roda possesses an INSANE knowledge of not only the entire library collection of over 30,000 books, but she can also perfectly describe you in detail every aspect of paper preservation and conservation there is to know. Interesting fact, in the right conditions, paper can outlive digital. I think that’s all I was able to remember :).

We were lucky to get a tour down to the “Vault” (no public access) which is home to a million photographic prints and negatives dating back to the late 1800’s and other rarities.

In other words, if you ever visit Keeneland, I highly encourage you to stop by at this amazing facility and ask for Roda! 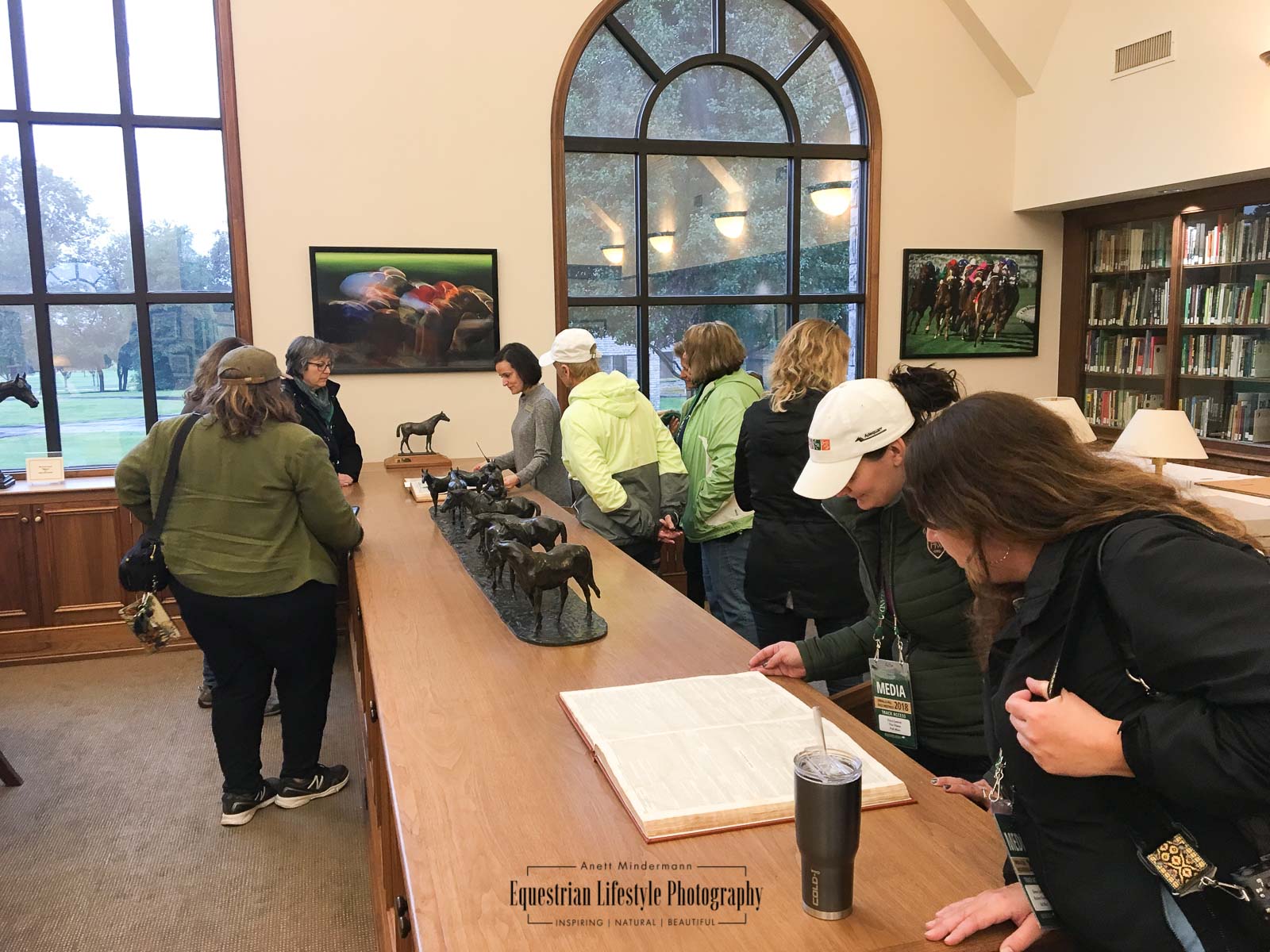 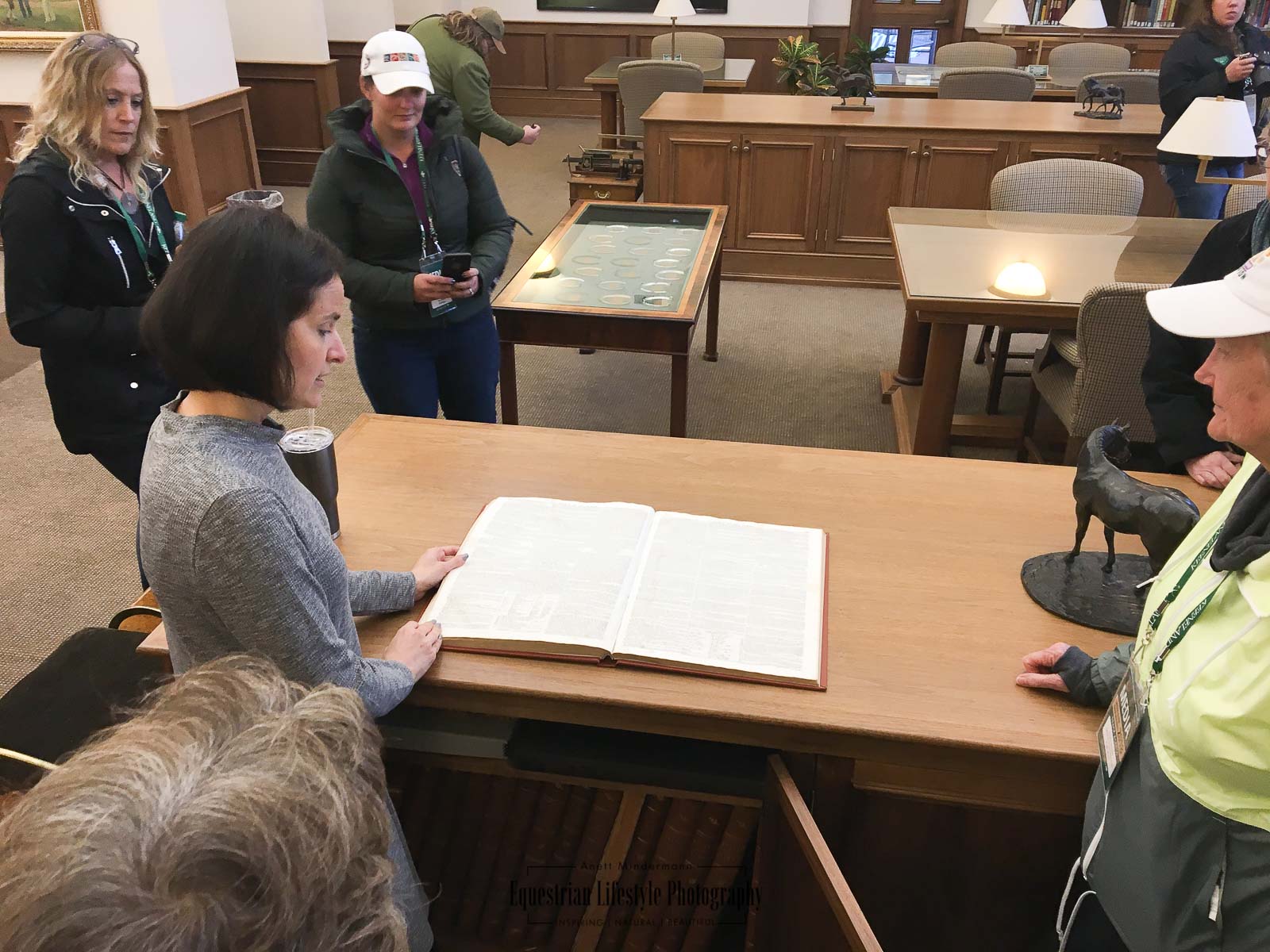 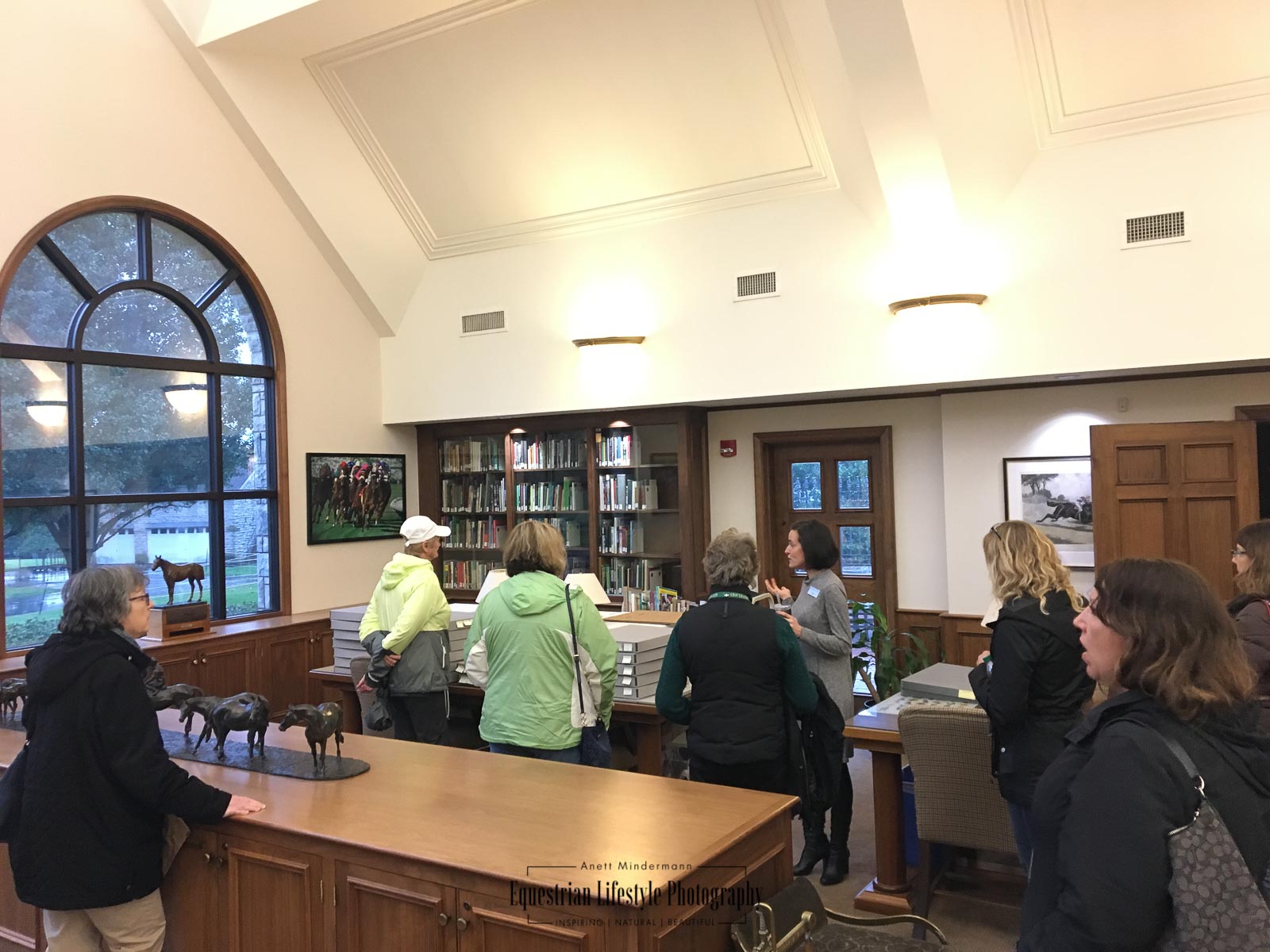 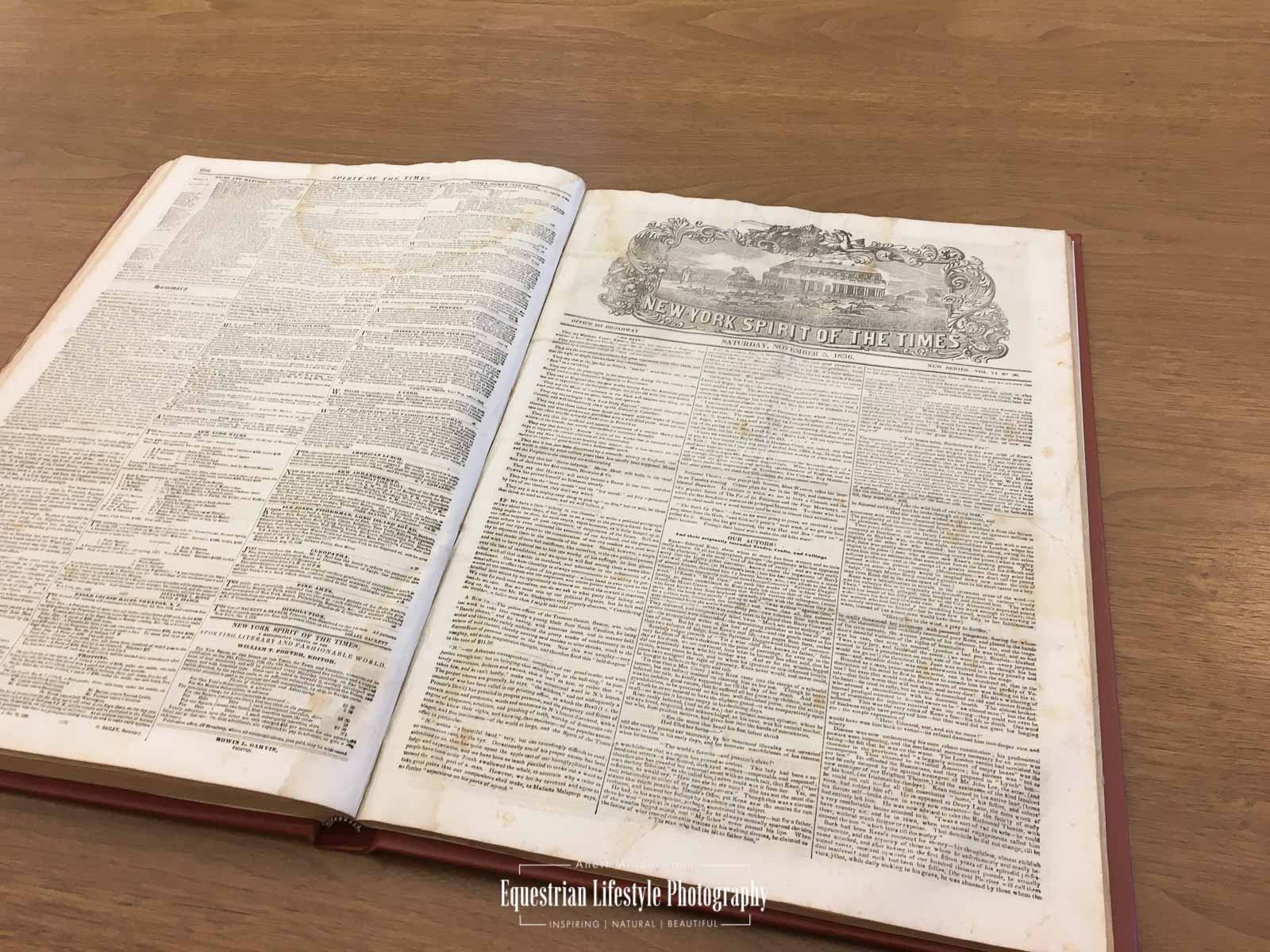 This concluded our private tour and we could now enjoy the races all afternoon! My camera was ready and so was I. The rain stopped at that point and it left the track quite muddy, which added some extra “texture” to my photos! My husband and son joined me for the remainder of the day.

Keeneland’s Spring Meet 2019 is coming up in April and guess who will be in the front row? :)

This time I am also planning on taking my sister, who will then be visiting me from Germany.

Fairytale Photography with Princess Mahailyn and her pony Kenny

5 Tips of what to wear for your equine photo shoot!